Investors always like to get in on hot new trends, and the cryptocurrency revolution certainly qualifies. Interest in digital currencies intensified toward the end of 2020 and into 2021. And even after a massive crash that lopped half or more off the prices of some tokens, the area is still getting a huge amount of attention from investors trying to gauge the long-term prospects for cryptocurrencies and other related applications made possible by blockchain technology.

The Nasdaq  exchange recently became the home of the hottest publicly traded crypto stock. Coinbase Global (NASDAQ:COIN) has become a leading provider of cryptocurrency brokerage services, and its stock was up by almost 2% in late afternoon trading Wednesday as prices of leading cryptocurrencies rebounded from recent declines. But at least one Wall Street analyst is less than optimistic about Coinbase's long-term prospects. 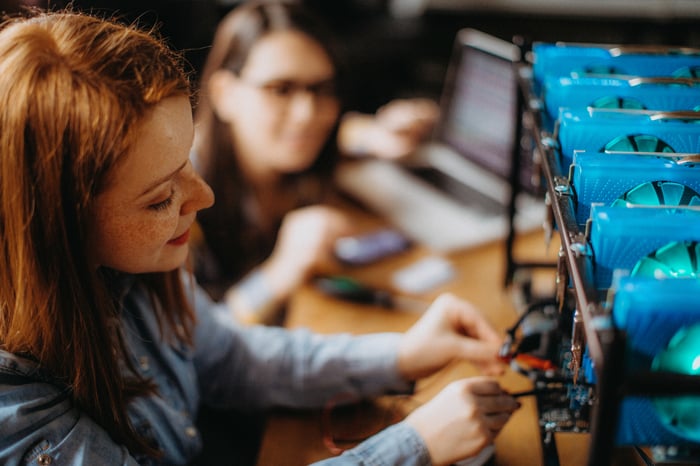 Coinbase's gain came as prices for several major cryptocurrencies made solid advances. Most top tokens were up by anywhere from 5% to 13% on the day, even though many had fallen to their worst levels in months just recently.

It's reasonable for Coinbase's stock price to track the ups and downs of crypto tokens. When investors are excited about cryptocurrencies, that leads to an increase in trading, which gives the company more revenue. If investors decide that the space no longer has any long-term promise, then Coinbase's trading volumes would likely suffer, hurting its revenues.

In the short run, Coinbase has emerged as a premier provider of crypto brokerage services. Many institutional investors have joined the individual investors who gravitated to its platform, and the growing popularity of its Coinbase Pro offering could well help the company build even greater customer loyalty.

On the other hand, one Wall Street analyst believes that Coinbase faces a much steeper uphill battle. Raymond James started covering it Tuesday, and gave it an underperform rating.

It's undeniable that Coinbase has a significant head start in gathering people interested in cryptocurrency trading. In a business in which reputation is key, it has managed to overcome the innate distrust that many investors have about crypto, allowing it to add large numbers of new accounts over the past year.

As Raymond James sees it, though, the problem is that there's nothing stopping other companies from entering the space and challenging Coinbase's leadership role. Because the platform derives a large portion of its overall revenues from trading commissions, the emergence of new competitors could challenge its ability to keep charging as much as it does.

Investors don't have to look too far to find parallels. Stockbrokers used to take in impressive amounts of fee revenue. Even during the discount brokerage era, major players still brought in billions of dollars from customers paying to trade stocks. Yet as time went on, intensifying competition forced commissions ever lower, a trend that culminated in the recent elimination of stock trading fees by nearly every major brokerage.

If the same thing happens in the realm of cryptocurrency trading, then Coinbase's stock could continue along the downward slope it has been on since its first day of trading. If the company can keep adding useful new services and features that allow it to differentiate itself from would-be disruptors, however, then its stock price might yet return to the levels it was trading at a couple of months ago.